The science of introversion: why introverts’ brains function differently than those of extroverts

Introversion is often (wrongly) associated with shyness, misanthropy and antisocial behaviour. However, as we explained in a previous article, “being introverted” and “being extroverted” depends on what we need to recharge our inner batteries: introverts turn inwards to recover their energy while extroverts need to turn outwards through interactions with people to gain their energy. Thus, introverts truly need to spend more time alone since even interactions with a small group of good friends can drain their inner batteries, thus withdrawing from social contact is essential to their functioning.

How is it that such different stimuli are needed for people to recover energy and feel good? To answer this, we take a dive into the biological basis of extroversion and introversion and see what scientists have understood so far on how the brain functions for these two different personalities.

The biology of extroversion/introversion

In 1963, British psychologist Hans Jürgen Eysenck brought biology back into the debate of behavioural psychology in his paper entitled “Biological Basis of Personality” (Nature 1963, 199:1031-1034). In his paper, he observed that identical twins are much more similar than fraternal twins in traits of extroversion and neuroticism (another one of the five personality traits he described). Eysenck mentioned a plethora of other studies on twins supporting a genetic inheritance of these traits. Nevertheless, he was the first one to theorise a link between the level of cortical excitation and cortical inhibition in the brains of people and their extent of extroversion/introversion. Specifically, he hypothesised that extroverts have high levels of cortical inhibition while introverts tend to have low cortical inhibition. Nearly twenty years later, Eysenck described the general features of his personality model and proposed that the reticulo thalamic-cortical pathways modulating the cortical arousal system determine a person’s extroversion/introversion. According to Eysenck’s model, introverts show higher chronic activation of the cortical arousal system than extroverts.

Recently, functional magnetic resonance imaging (fMRI) has been used to detect brain activity in subjects performing cognitive tasks (Kumari et al, J Neurosci 2004; 24 (47) 10636-10641). Using this technique to monitor subjects, comparing extroverts to introverts, extroverts show a greater increase in activity in the dorsolateral prefrontal cortex and anterior cingulate cortex  while performing the tasks. These areas in the brain are involved in decision making, social processing, and reward. They also exhibit lower resting fMRI signals (brain activity while not performing any task) in the thalamus and Broca's area (involved in speech and language comprehension and production) extending to Wernicke's area (involved in language comprehension). These newer findings provide more support to Eysenck’s theory of the biological basis of extroversion/introversion and the link between cortical activity and personality traits.

In a nutshell, introverts show a high level of cortical arousal all the time, which means they need very little to be stimulated.

Thus, being in crowds and talking with many people hyperstimulates them, which is how their energy gets drained. Silence and solitude, or situations and environments with as few stimuli as possible, in general, are necessary for the inner balance and focus of introverts. Conversely, extroverts show a low level of cortical arousal which is why they constantly seek to interact with other people and thrive with noise. They tend to need much more stimuli to get aroused and thus charge their inner energy.

Other studies have shown that extroversion is related to brain processes that associate contexts with reward (Depue & Fu, Front. Hum. Neurosci., 2013), in particular the dopaminergic function. For instance, populations living in demanding climates have a highly efficient dopaminergic system which makes them more perceptive toward reward values, and thereby tend to be more extroverted (Fischer et al, Sci Rep, 2008; 8:1733). On the other hand, populations in temperate climates share instead a less efficient dopaminergic system and exhibit risk-avoidance behaviours, with a more introverted personality. Scientists have also identified genetic polymorphisms for two genes of the dopaminergic system (catechol-O-methyltransferase and D4 dopamine receptor) that are linked to higher levels of novelty-seeking behaviour and higher levels of extroversion (Golimbet et al, 2007; 37:601–606), and have found that availability of dopaminergic receptors in the striatum is correlated with extroversion (Baik et al, NeuroReport, 2012; 23 (4):251-254).

On the perspective of “Nature” versus “Nurture, thanks to these studies, we know that “Nature” plays an important role in defining our personality. What about “Nurture” though, namely the environment surrounding us? Let’s take a look at studies on twins which examined the interaction of genes and environment, particularly parenting. By observing positive associations, like having parents proud of their children, and negative associations, like having parents losing their temper with their children, Krueger and colleagues (J Pers. 2008; 76(6):1485–1521) showed that subjects with high levels of negative associations or low levels of positive associations have lower genetic contributions in becoming respectively different or more similar to their twins. Therefore, environmental factors such as parenting style, our experiences as a child, and education received, will also influence our level of extroversion/introversion. 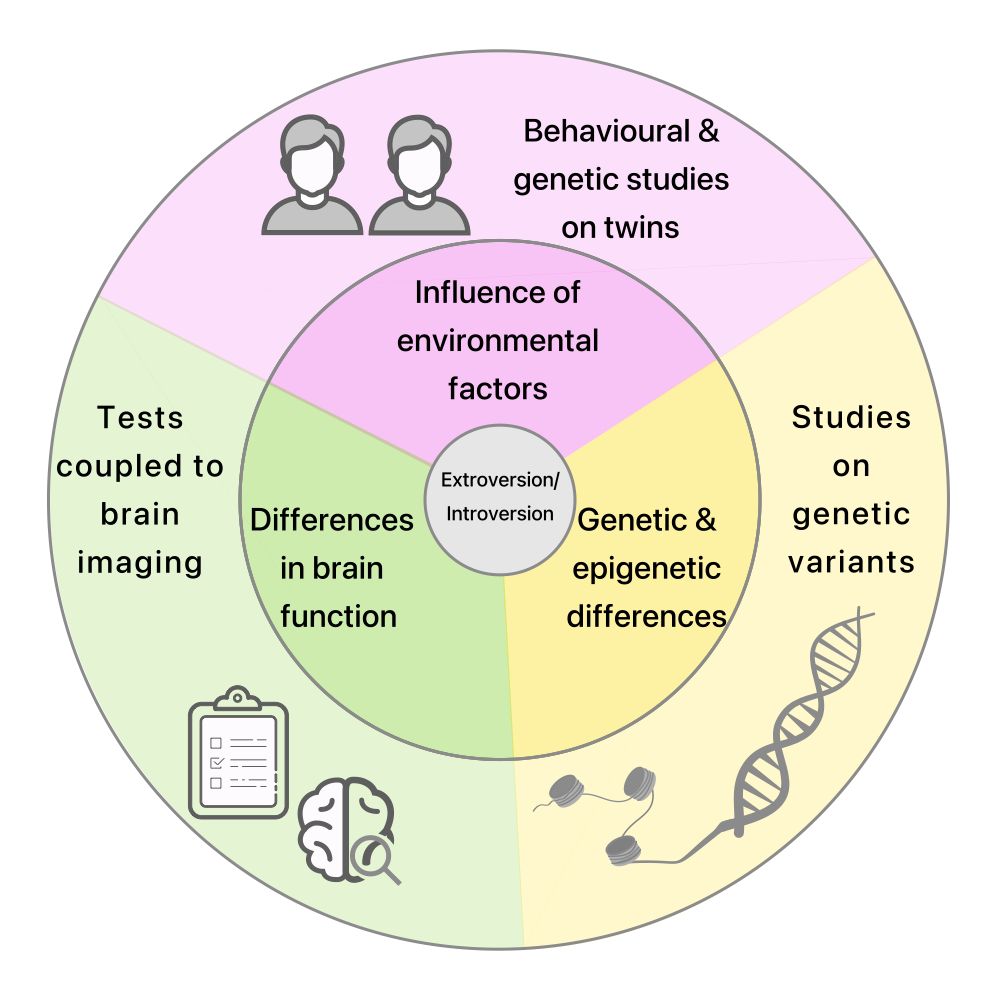 Not only does personality traits depend on genetic and biological traits, but these traits may also influence our mental health. When it comes to the health of our brain, what is more important than a good night of sleep? To find out how sleep and extroversion/introversion are linked, scientists administered psychomotor vigilance tests to subjects during a 77-hour sleep deprivation session, during which they had to answer some questions asked by the researchers. The most extroverted participants were slower at answering, and the longer they had stayed awake the slower was their response speed. This suggests that differences in extroversion/introversion can also determine the vulnerability or resistance to the adverse effects of sleep loss (Killgore et al, J. Sleep Res., 2007; 16:354–363).

One of the big myths of introversion is that introverts have social anxiety, which is why they shy away from social interactions. Is there a link known between the two traits? A Swedish study found that subjects with social anxiety disorder show lower levels of extroversion compared to healthy controls (Costache et al, PLoS ONE 15(4): e0232187). Other studies have found that the higher the level of extroversion, the lower is the prevalence of social phobia and anxiety (Jylhä et al, J of Affective Dis, 2009; 114(1-3):110-121). While these studies show that more introverted people tend to have higher levels of anxiety, it doesn't mean that all introverts suffer from anxiety. Anxiety can manifest itself in comorbidity with depression. It has been shown that depression has strong effects on extroversion and other personality traits, like conscientiousness, and the occurrence and recovery from depressive states can result in changes in the level of these personality traits (Karsten et al, J of Psychiatr Research 46, 2012; 644-650). However, it doesn’t seem to have an influence on the prediction of depression in introverts (Jylhä et al, Depression & Anxiety 2009;26(4):325-34. doi: 10.1002/da.20385). This also doesn’t mean that introverts don’t get depressed. It just means that there is a lot more to be studied and understood about introversion and prevalence of anxiety and depression.

The current pandemic has been a pivotal event in all our lives. It led to an increase in the prevalence of anxiety and depression among the world population due to lockdowns, forced isolation, fear about COVID-19, and fear for our health and the health of our loved ones. Introverts have been considered the lucky ones who had won the golden ticket of resilience in all these years of isolation and social distancing. However, contrary to what is commonly thought, many introverts experienced an increase in anxiety, depression and feelings of loneliness during the COVID-19 pandemic (Wei, Front Psychol, 2020). What is surprising is that the living condition (living alone or with others) is a predictor for the severity of the mental health issues developed in relation to the COVID-19 pandemic: living with others is associated with more severe anxiety, but not with feeling of loneliness or depression. On a more personal note, I had a rather pleasant experience in lockdown and during the first year of the pandemic, because I could finally withdraw from the constant social interactions I was obliged to entertain for work or in private life. Nonetheless, after the first year of bliss things changed also for me and my levels of anxiety started to rise.

Have you noticed how the studies we mentioned usually refer to levels of extroversion/introversion? Don’t forget that extroversion and introversion are just the extremes of a continuum of energy, and that the vast majority of us fall somewhere in between.

The brains of extroverts and introverts work differently and there is a bulk of evidence published so far about it. Neurological investigations taking advantage of techniques like PET scans and brain functional MRI scans among others, jointly with psychological evaluations and personality assessments of the subjects undergoing these analyses, are helping us to understand the mechanisms underpinning personality differences. In the future, new techniques might help us see more about what happens in our brains and unravel the secrets of personality.

The implicit bias against introverts - a guide on how it exists and where it originates
New Advances in Depression Therapy
The science of introversion: why introverts’ brains function differently than those of extroverts

Retention period: This cookie only remains for the current browser session.